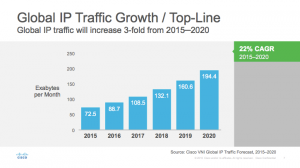 Internet video will account for 79% of global internet traffic by 2020, up from 63% in 2015, according to new research from Cisco.

“The world will reach three trillion internet video minutes per month by 2020, which is five million years of video per month, or about one million video minutes every second,” according to the forecast.