Facebook hails ‘social presence’ as next stage in VR revolution 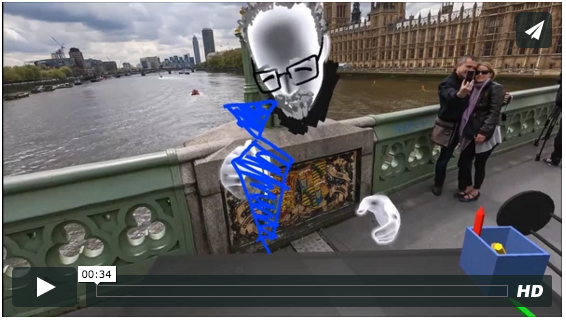 Facebook took attendees on a virtual tour of London

“We can build truly immersive experiences…building deep personal connections with people who can be tens or hundreds of mile away,” he said.

“When we talk about our vision of social presence in VR, it gets really fun when you bring in your hands,” said Schroepfer during his presentation, introducing Oculus Touch, which takes the tracking tech in the headset and puts in people’s hands via a small handheld device.

He said that bringing multiple people into VR environments using tools such as Oculus Touch and features such as animated avatars could improve engagement.

Schroepfer took the F8 audience on a virtual tour of London to illustrate some of the additional social and interactive features that Facebook was bringing to the VR experience, including the ‘virtual selfie cam’, virtual pens that enable users to draw new features into the VR experience and ‘virtual video spheres’ that could be exchanged between users. During the demo a virtual selfie created in a VR environment was posted directly to a Facebook feed.

Schroepfer also said that getting 360° video to phones is now becoming easier thanks to advances in streaming video compression.

“Over the last year the Facebook team has made multiple advances in how we stream 360° video. We’ve gone through different formats…and most importantly we’ve implemented adaptive streaming,” he said. This, he said, enabled the deliver of much higher resolution at lower bitrates.

He hailed the power of the recently launched Oculus Rift headset from the Facebook-owned VR specialist, which is “incredibly comfortable”. The launch, along with the release of 50 titles, had been “amazing”, he said.

Schroepfer also hailed the launch of Facebook Surround 360, the social network’s new camera to allow capture of 360° video. “Most content capture today involves lots of manual labour. It is one of the key things limiting the explosion in 360° content  – it is so difficult to shoot,” he said.

Schroepfer said there are “still a ton of challenges to solve” to make VR work, but that it had been “a big year for Facebook and VR” with the launch of the Gear VR and Oculus Rift.

He said that Gear VR offered the least expensive option, with over “hundreds of apps” shipped and 200 million of hours of video watched on the headset via Facebook.

Facebook set up its VR social research team in February.