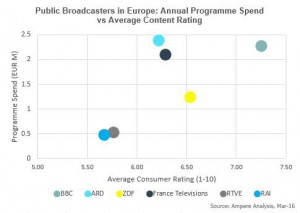 UK TV channels inspired more loyalty and brand affinity than their European and US counterparts, according to Ampere Analysis.

In new research that looked at the US and the ‘top five’ European markets – the UK, Germany, France, Spain and Italy – Ampere also found that there was a “significant performance gap” between public service broadcasters and commercial pay TV channels.

In the UK, national broadcaster the BBC has a strong correlation between the percentage of people that watch its channels and their likelihood to recommend them.

In the US it’s the opposite with national broadcasters the most watched but least recommended, while smaller targeted channels like HBO, Starz, Showtime have better recommendation scores, according to Ampere.

The BBC was found to be the best performing national public broadcaster, with a higher percentage of viewers and higher recommendation ratings than all European counterparts. The closest rivals were ARD and ZDF in Germany, and RAI in Italy, with France Televisions and Spain’s RTVE trailing “far behind”.

In terms of commercial broadcasters, the UK accounted for three of the top four channels when ranked by Net Promoter Score (NPS) – which measures customers’ propensity to recommend a service to others.

Commercial broadcaster Mediaset in Italy had the most strongly recommended channel portfolio, followed by ITV, Channel 4 and Sky in second, third and fourth place.

Meanwhile, SVOD service Netflix enjoyed a “much higher NPS than traditional pay TV competitors” in established markets like France, UK and USA, according to Ampere.

“Our analysis shows a big difference in engagement between new and old TV players. What does become clear is that content and brand are key. The strength of brand BBC shines through,” said Ampere Analysis principal analyst, Ed Border.

“Comparing the performance of the BBC with other European public boadcasters shows that despite major groups in France and Germany spending similar sums on programming, there is a stark difference in viewer engagement and average channel ratings.”

Securing your revenue in the new age of video piracy: DTVE’s Digital Symposium looks at the threat and how to addre… twitter.com/i/web/status/1…
18 September 2020 @ 13:37:48 UTC