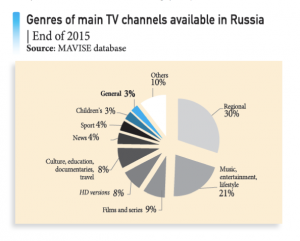 The European Audiovisual Observatory’s report on the Russian market said that more than 2,300 TV channels operate and are accessible in Russia or have licences to broadcast there.

Private companies own 80% of these stations, 13% are state owned and 5% have combined ownership. A third were were general regional channels, while 21% of channels were devoted to entertainment and lifestyle programming, according to the report.

Gazprom Media, VGTRK and National Media Group were found to be the largest media firms. Gazprom owns more than 50 channels including the Red Media and ProfMedia holdings; VGRTK has full or partial ownership of 30 channels, plus regional TV and radio companies; while National Media Group operates 25 channels.

“Overall, more than half of all the channels available in Russia are pay channels, and a large proportion of free-to-air channels are provided by regional terrestrial television and radio companies. Hence, in every single region of the country viewers must pay to access the majority of TV channels,” according to the ‘FOCUS on the Audiovisual Industry in the Russian Federation’ report.

In 2014 68% of Russian homes were found to subscribe to pay TV, up 8% on the previous year. The highest saturation of pay TV was in the Central and Northwestern districts, at 80% and 77%, respectively, while the fastest growth rates were observed in Siberia, with pay TV up 15%.

The report said that the total number of pay TV subscribers in Russia reached 37.7 million in 2014 with the industry accounting for an estimated at RUB61.2 billion.

The European Audiovisual Observatory also noted “rapid growth in Russian VoD market” with more than 40 VoD services available at the end of 2015 – dominated by transactional and subscription business models.

The leading VoD service was found to be Ivi.ru with 38 million viewers, followed by Zoomby.ru with 17 million users, Megogo.net with 14.3 million and Tvigle.ru with 11.4.

All of these services are primarily ad-supported, with Ivi and Megogo.net also offering subscription, rental and purchasing options. Tvigle also does rentals. Sixth place VoD player Okko which operates a rental and purchase model, with an additional subscription model was found to be the leader in terms of earnings, making revenue of RUB630 million in the first half of 2015.

“VoD is still growing, and it is doing so faster than other segments of the audiovisual industry. In the future, one can expect to see subscriber services strengthen their position and further growth through mergers and acquisitions,” said the report.