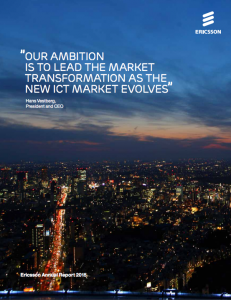 The fragmented TV market will have a compound annual growth rate of 10-12% between 2014 and 2018, driven by internet technology, according to Ericsson.

In its 2015 Annual Report, which was published today, Ericsson said that IP technology, networks and the vast amount of video-enabled connected devices are driving the transformation of the TV and media market – particularly the delivery and consumption of TV content.

The report also said that smartphone traffic is tipped to grow by around six times, and video traffic by around eight times, in the period of 2015–2020.

Ericsson said that it wants to be the “transformation partner of choice” for content owners, broadcasters and TV service providers as the TV and media industry undergoes a major change, caused by the emergence of the ‘Networked Society’.

The company pointed to “significant investments” in the TV and media space, including its recent acquisition of cloud DVR and video storage provider Fabrix Systems, and its October buyout of video processing firm Envivio.