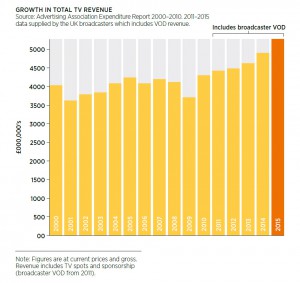 TV advertising spend in the UK reached a record high of £5.27 billion last year, driven by spend by online companies such as Netflix and Facebook, according to new research by Thinkbox.

The UK marketing body for commercial TV said that full year figure was up 7.4% from 2014 and marks the sixth consecutive year that TV advertising revenue has grown in the UK.

The £5.27 billion figure covers all money invested by advertisers in commercial TV – across linear spots and sponsorship, broadcaster VoD, and product placement.

Citing Nielsen data, Thinkbox said that the growth has been fuelled by increased investment in all major marketing categories, with “significant growth coming from online companies”.

“Online businesses invested over £500 million in TV in 2015, an increase of 14% on 2014. Google, Facebook and Netflix spend over 60% of their marketing budgets on TV advertising,” according to the study.

In total there were 877 new or returning advertisers on TV last year, with Facebook the year’s biggest new TV advertiser, investing £10.8 million.

Thinkbox also said that in 2015 TV advertising was 30% cheaper in real terms than 10 years ago – due in part to increased advertiser demand and some decline in TV set viewing.

“TV advertising works, it works better than anything else, and it works for all budgets. Nothing else has TV’s reach, scale and connection with audiences; no other form of advertising is as trusted,” claimed Thinkbox CEO Lindsey Clay.

“Advertisers of all sizes, from global technology companies to local businesses, know this and have voted with their investment. Online businesses in particular recognise the impact TV advertising has and have significantly increased their investment recently. This is something we expect to continue in 2016.”