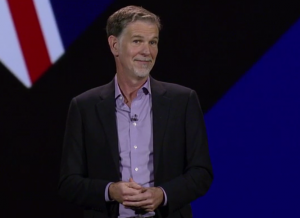 In a keynote presentation at the Consumer Electronics Show in Las Vegas, Hastings said: “I am delighted to announce that while we have been here on stage at CES, we switched Netflix on in Azerbaijan, in Vietnam, in India, in Nigeria, in Poland, in Russia, in Saudi Arabia, in Singapore, in South Korea, in Turkey, in Indonesia and in 130 new countries.”

The huge and unexpected expansion comes after Netflix said last year that it aims to be in 200 countries by the end of 2016. There was a swathe of European launches last year including France, Germany and Spain.

Claiming Netflix to be the “leading creator of 4K content” with its Netflix Originals series and films primarily filmed in 4K, Hastings said that HDR will make “colours brighter and truer, creating a visceral sensation.”

He added: “We have over 1,000 engineers focusing on better global delivery, more intuitive UIs, incredible picture and audio quality.”

At last count Netflix had 66.02 million paying subs in the US (69.2 million including those on a free trial), and 23.95 million in international markets (25.95 million including those on a trial). Its stock price has suffered, however, in recent days as analysts cautioned US growth may be flattening. As DTVE went to press it had risen 6% in the immediate aftermath of Hastings’ announcement.

The streaming service has pledged to almost double its original drama output this year and will make over 30 series. This week it announced Gypsy, a new drama following a therapist.