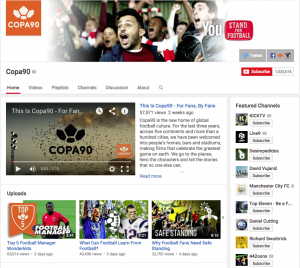 The deal gives Liberty a 14% stake in the business and values Bigballs at £50 million. It also grants Liberty the option to up its investment in the firm in six months’ time.

Bigballs CEO Tom Thirlwall said that the firm will use the funding to “grow the business rapidly across multiple territories”. He added that Bigballs had become “an authentic voice of fans in an era when the younger participant feels the football industry has forgotten them.”

Niall Curran, president of Liberty Global’s media investments group, said: “Bigballs Media has, in a short period of time, built a highly engaged fan community through its high quality, relevant and authentic sports content. We believe Tom and his team are well placed to continue to build a successful and distinct content brand.”

London-based Bigballs was founded in 2006 as an early proponent of digital-first original programming, such as Bebo series Kate Modern and web drama Who Killed Summer?

Bigballs launched Copa90, a YouTube channel dedicated to football fan culture, in 2012. This has since spawned The Copa Network, a digital football community that includes the Copa90 brand and KickTV, a YouTube network devoted to North American soccer programming.

Bigballs has also moved into TV content and is co-producing new Sky One comedy-drama You, Me and the Apocalypse (formerly known as Apocalypse Slough) with Working Title films.