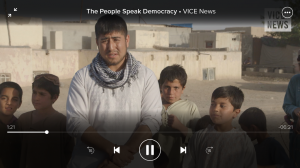 Spotify is working on original content and experimenting with different genres, formats and lengths of programming as part of its new video strategy, according to the music streaming service’s content chief.

Speaking at MIPCOM in Cannes this morning, Spotify’s global head of original content, Matt Baxter, likened the current stage of Spotify’s development to a “rambunctious teenager getting ready for college”, as the company pivots from its music streaming roots to also become a video content publisher.

“This is a big bet for the company. I think across the entire company they realise that original content is a way to create a better value proposition for our users,” said Baxter.

“I think our approach over the next three-to-six months is to really try a bunch of different things… we want to play around with different lengths [of content]. Obviously the 2-3 minute length is what works on YouTube and sub-1 minute works on Facebook. So we’ll have a lot of content that’s approximately that length, but that doesn’t mean that we’re going to just stick with that.

“In terms of subject matter, the key thing is it’s got to have that core DNA of music, but we also want to experiment with other genres and other formats.”

LA-based Baxter – who joined Spotify earlier this year and was formerly head of branded video at Buzzfeed – said that there will be a “lot of experimentation as we go forwards” and that Spotify is developing a number of different ways to work with partners.

“We’ve got some relationships in place where we are licensing some content from publishers, but we also are working on some original stuff,” said Baxter, adding that Spotify has also struck co-production deals.

“We are rapidly – as we experiment with differenet genres and formats – and really trying to identify what we think is going to resonate with our audience based on our data, actively working on different strategies for windowing, IP-ownership and licensing,” said Baxter.

The content chief said that to “disrupt the music industry even more” the Spotify is looking to “create a broad portfolio of content that’s based on what our users actually like, what they’re interested in” and to programme that in a way that further engages subscribers and gives them more value from the service.

“We have to experiment with content that’s going to work within our service and within our ecosystem,” said Baxter.

Spotify started positioning itself as a wider entertainment proposition back in May, announcing that it  will package clips and full episodes of television programming that will sit alongside the core music streaming service.