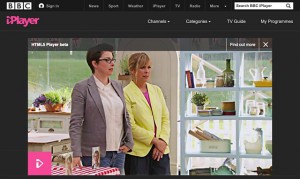 The BBC has historically used Flash to deliver iPlayer to desktops, although it has used HTML5 on other platforoms – notably iOS devices.

The new HTML5 player is being tested with browsers Firefox 41, Opera 32, Safari on iOS 5 and above, BlackBerry OS 10.3.1 and avove, Internet Explorer 11 and Microsoft Edge on Windows 10, and Google Chrome across all platforms.

In a blog posting, James east, product manager, media playout, said that the BBC was also moving away from its existing BBC Media Player app for Android devices, with users of Android KitKat 4.4 or above able to use the HTML5 player on their phone or tablet.

East said the new HTML5 player included features such as touch-based volume control and would be improved over the coming months to match the experience of the Flash player.

He said the BBC was also working on transitioning to MPEG-DASH adaptive streaming, although this is not yet available for live  and some archive content, for which users will need to load the non-beta payer on a one-off basis.

East said that the move was “the first step towards making the HTML5 player our default” but that it would continue to support Flash on the desktop “for at least the next few years”.