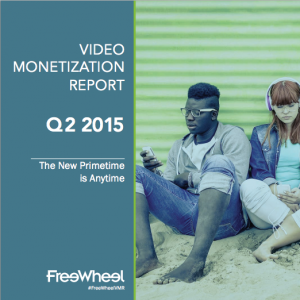 In the US there was 25% growth in video views and 32% growth in ad views year-on-year in the second quarter, according to FreeWheel’s Q2 2015 Video Monetisation Report.

The US company, which provides end-to-end video technology to companies including ABC, AOL, DirecTV, ESPN, Fox, BSkyB, and Turner Broadcasting System, claimed that the findings of its report show that “the new primetime is anytime.”

Long-form and live content were the main drivers, growing 26% and 146% year-over-year respectively, while 38%% of ad views came from devices other than desktop and laptop computers, with smartphones and over-the-top (OTT) devices – like Roku, Apple TV and Chromecast streaming devices, and games consoles and smart TVs – leading that growth, according to the report.

“Smartphones now account for greater than one in five video ad views reflecting triple digit growth over the last two quarters,” said FreeWheel. “Consumption of premium video across day parts does not show a dominating skew towards any particular hour, as viewers create their own custom primetimes.”

“MVPD apps have become increasingly popular venues for syndication, accounting for 4.5% of all programmer ad views with 200% growth,” said the report.