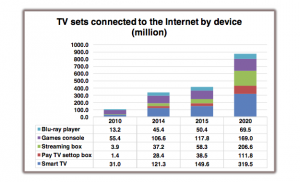 Digital TV Research predicts that in 2020, 206.6 million TV sets will be connected via streaming devices such as Chromecast and Apple TV, up from an expected 58.3 million by the end of this year, with principal analyst Simon Murray commenting that these devices have “made more of a splash than previously expected.”

Smart TV sets will account for 36% of the 2020 total of connected televisions at 319.5 million, while the number of sets connected via games consoles will rise to 169 million by 2020, according to the research.

An anticipated 69.5 million TVs will be connected via Blu-ray players and 111.8 million by pay TV set-top boxes in 2020.