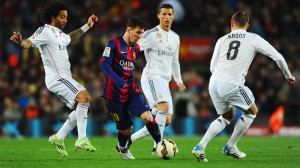 Sky Sports has secured the UK and Ireland rights to Spanish La Liga football for a further three seasons.

The deal, which extends the partnership between the pair into its 20th year, will enable Sky Sports viewers to view over 100 live fixtures a season, including the Clásico matches between Real Madrid and Barcelona and the final of the Copa del Rey.

La Liga coverage will also be available on Sky Go to Sky subscribers, while non-subscribers will be able to view the matches by purchasing day or week passes on the Now TV OTT service.

“This is fantastic news for Sky Sports and strengthens our position as the first choice of sport in the UK and Ireland.  The agreement means our viewers can enjoy the likes of Ronaldo, Messi, Bale and Neymar week in week out throughout the football season. Add to that the ‘El Classico’ clash between Real Madrid and Barcelona in the league and Sky Sports viewers are sure to see some of the best football moments throughout the season. We’re proud to take our partnership with La Liga into its 20th year and remain the home of Spanish football for another three years,” said Barney Francis, managing director, Sky Sports.

“Sky Sports is the leading sports broadcaster for the UK and Ireland and we are delighted to continue our partnership with them for another three years.  La Liga has a huge global fan base and by renewing with Sky Sports, the agreement provides us with the best possible way to showcase our league, our teams and our players to our UK and Irish audience,” said Javier Tebas, president of La Liga.