NGSN gears up delivering OTT football to US 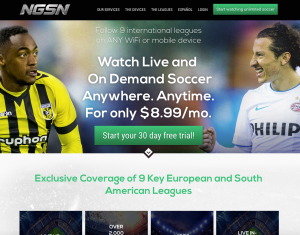 Online sports network NGSN has secured a raft of rights to bring international football to US viewers via its online streaming service, including the first internet-only coverage of a Barcelona match, against AC Roma in the annual Joan Gamper Trophy tournament.

NGSN, which launched a beta trial of its service in the spring, has secured rights to the leagues of Argentina, Bolivia, Chile, Ecuador, Japan, Portugal, Russia, The Netherlands and Venezuela as well as the Portuguese Taça da Liga and a summer programme of friendlies with UEFA qualified teams. NGSN has also acquired the right to broadcast the Korean K League, the Portuguese Super Cup, the Russian Super Cup and the Colonia Cup 2015.

The streaming provider said other new leagues and competitions would be added soon.

NGSN is operating a freemium moeel, where users can download its app for free with a one-month free trial after which they will be charged a subscription fee.

The company said that 40,000 fans had signed up in the first six weeks of the trial. Subscribers of the service can watch full matches live and on-demand along with match recaps, goal highlights, statistics and commentary in in at least two languages.

NGSN said it would make the service available on devices including the Xbox and Roku soon, and that it planned to broadcast up to 3,000 matches for the 2015-16 season.