More than half of homes with kids watch OTT on TV, says GFK 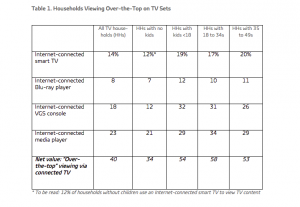 Some 54% of homes with children aged 17 and under watch over-the-top content on a TV set, compared to a national US average of 40% of TV households, according to GfK.

The research firm’s ‘2015 Ownership and Trend Report’ claims that households with at least one member aged 35 to 49, and those where children are present, are “much more likely to stream video and view other content using an internet-connected device attached to a TV.”

Streaming video is now the third most common online activity, behind social networking and online shopping, according to the study, putting it ahead of listening to music online, instant messaging, and internet gaming.

“The old stereotype of an OTT viewer hunched over a laptop or tablet is very much out of date,” said David Tice, senior vice-president in GfK’s Media and Entertainment practice.

“Rapid adoption of smart TVs and digital media players over the past three years has pushed OTT to the biggest screens in the home, with attendant expectations from consumers that OTT quality should be as good as regular TV service, and as easy to use as mobile OTT options.”