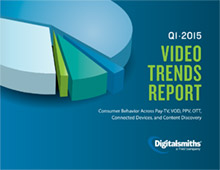 Most North Americans would, on average, choose 17 channels to make up their ideal pay TV line-up and pay up to US$38 a month for it, according to a new survey.

The Q1 2015 Video Trends Report, by TiVo-owned search and recommendations provider Digitalsmiths, found that 81.6% of respondents would like to select only the channels they want to watch, rather than to sign up for one of the large pre-set channel packages that are usually offered today.

The respondents who said were interested in an “à la carte service” chose an average of 17 channels – from a list of over 75 popular channels that are typically included in pay TV services – to make their “ideal channel line-up”.

When asked what was the most amount of money they would pay for this ideal line-up, the average price was US$38 a month.

“The numerous changes taking place in 2015 might force pay TV providers to think creatively and offer different structures in their packages. Pay TV providers might consider offering a lower-priced option, excluding content such as ESPN, to appeal to those who may not be interested in sports,” said Digitalsmiths.

“Could so-called ‘skinny packages’ increase satisfaction for the on-the-fence subscribers who watch 20 or fewer channels out of the 200+ offered? While à la carte packages will not appeal to all pay TV subscribers, with the addition of new services entering the landscape, it is important to keep a pulse on consumers’ sentiments towards this type of offering.”

According to the survey, the top five stations selected by those who would prefer to pick the channels they want to watch, were ABC, Discovery Channel, CBS, NBC and the History Channel. Surprisingly, premium sports channel ESPN only ranked at number 20.

The report surveyed 3,144 consumers aged 18 and over in the US and Canada.