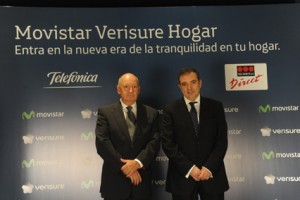 Telefónica is launching a new service that combines fixed and mobile broadband, TV and telephony with home security.

The home security service, Movistar Verisure Hogar, will be available from June 17 priced at €16 with an additional charge of €9 for equipment rental.

The service is managed from a smartphone via an application downloaded by the user and, in principle, it will be available for iOS and Android, according to Telefónica.

Telefónica has teamed up with home security service outfit Verisure to offer a 24-hour, 365-day emergency service, including access control, video cameras and remote recording. The service will be available exclusively to Movistar broadband customers. Users can install the service themselves and manage it via a smarthone application.

Telefónica has also teamed up with security technology provider Securitas Direct to offer additional home security features to those in need of a high-security service. Movistar customers will be able to sign up for the Securitas Direct alarm on the company’s commercial channels for€39 per month, plus €200 for extra equipment.

The pair are working on a range of new services, according to Telefónica. Other technology partners include Sigvox, the French transmission services provider partly owned by Telefónica.