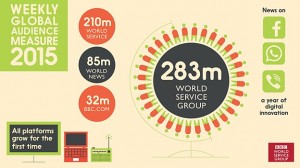 The BBC has a combined weekly global audience of 308 million people across its news and entertainment services, according to figures published by the corporation.

The combined figure includes radio, TV and online audiences – including, for the first time Facebook and YouTube reach – with growth recorded across all platforms.

The BBC said that its weekly global news audience for 2014/15 climbed by 7% year-on-year to a record 283 million – representing one in every 16 adults around the world.

For the first time TV overtook radio as the most popular platform for BBC international news, with an audience of 148 million, compared to radio’s 133 million and the web’s 55 million.

BBC Global News’ audience grew to 105 million with BBC World News TV’s up by 12% and the bbc.com/news website growing by 16%.

The BBC World Service’s audience increased by 10% and now stands at 210 million, with the biggest boost coming from new World Service TV news bulletins in languages other than English, according to the BBC.

BBC World Service English also reported its highest-ever weekly reach with an audience of 52m, an increase of more than 25% year-on-year.

“The consumption of branded BBC services across TV, radio and digital platforms speaks to the international appetite for premium content across all the genres for which we are best known – primarily news, but increasingly for drama, factual and entertainment.”