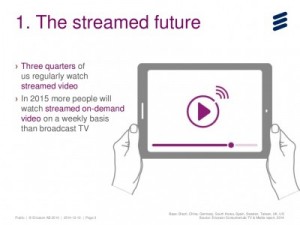 In 2015 more people will watch streamed on-demand video on a weekly basis than broadcast TV, according to research by Ericsson.

“At the current pace of change, maybe that will happen around 2020,” said Björn. “Streaming is overtaking broadcast for the simple reason that consumers see more value in something that is delivered when they want to watch it rather than when the clock hits a certain hour. Simultaneously we are creatures of habit, so although the value of getting something on demand is obvious, the change happens gradually.”

Ericsson’s ConsumerLab survey of 23 countries found that more than three-quarters of consumers browse the internet and half use social media every day.

Last year, the research found that streaming overtook broadcast TV in terms of popularity among those aged 16-45, with 80% in this age group watching streamed video “several times a week or more”.

Some 77% of the total sample population watched broadcast content, compared to 75% who favoured streaming services, but Ericsson said this will change during 2015. “The year will be historic, as we will watch streamed content more often than broadcast TV,” said the report.