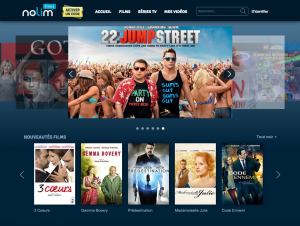 Nolim Films will enable customers to buy and rent TV and movies and is initially available on smartphone, tablet, television and computer. Content includes movies Gravity, Godzilla and Edge of Tomorrow, hit TV shows including Gotham, The Walking Dead and Arrow and local French content.

Customers will be able to rent or buy UltraViolet and non-UltraViolet content which will be automatically added to their digital library. They can then stream the purchased content directly to their connected devices or downloaded for offline playback.

Customers will also be able to redeem UltraViolet codes entitling them to free digital copies of movies they purchase on DVD or Blu-ray discs with the UltraViolet logo on their packages.

“Our clients’ consumption habits are constantly evolving. With Nolim Films, we will address their expectations and new uses of video. This new offer is part of the brand’s digital strategy, which relies on the complementarity of our distribution channels,” said Noël Prioux, executive director of Carrefour France.

Carrefour claims to have about 3,000 titles at launch, available for rental from €1.99 and from €4.99 for purchase. The company says it is the first to launch an UltraViolet service in France.

The service uses the OTT platform provided by Saffron Digital, including content preparation and management, storefront services, application design and development, a digital locker and UltraViolet integration, and a secure player.

“We are delighted to be involved in the launch of such a monumental service. As well as offering its customers a new and exciting entertainment experience, Carrefour is securing its place as one of the world’s leading entertainment retailers. As one of the biggest UltraViolet services to launch in Europe, Nolim Films will no doubt be instrumental in driving digital media adoption throughout the region,” said Jason Keane, CEO of Saffron Digital.