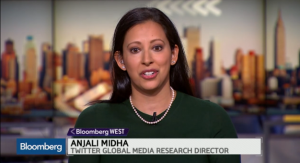 Tweets about TV shows can drive ratings, but ratings also drive Tweets, producing a cyclical relationship that the microblogging network is still exploring, according to Twitter research executive Anjali Midha.

In a video interview on Bloomberg, Twitter’s global media and agency research director said that there was “absolutely” the potential for different revenue streams in relation to Twitter predicting TV trends.

Discussing Twitter’s TV measurement partnership with Nielsen, Midha said that research from late last year shows that having talent like celebrities, producers and writers Tweet as a show is airing “helps a tremendous amount in terms of driving engagement, as do simple things like putting hashtags on the big screen.”

She added that the rise of on-demand viewing and the knock-on effect that has on live interaction is something “that we are actually thinking about pretty actively at Twitter, as well as in collaboration with our media partners, to figure out how we can really bring the best experience to our community.”

“We know that there’s a very cyclical relationship in that Tweets and seen Tweets can actually drive ratings, but ratings also drive Tweets. So we know that there’s a little bit of both happening. We’re obviously really excited to keep studying that phenomenon,” said Midha.

In research released by Nielsen last year, the information and measurement firm said that TV networks are in some instances now are seeing more than 50% of their 18 to 34 year-old viewership tuning in during the seven-day window after the live airing of shows.

Nielsen and Twitter teamed up last year, launching a new service in May to measure Twitter TV demographics across 250 US channels.