Tablet user numbers to top one billion in 2015, says eMarketer 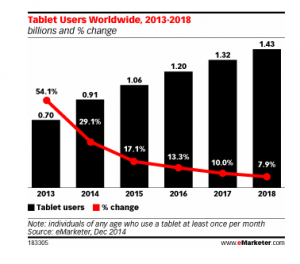 More than 1 billion people, nearly 15% of the world’s population, will use a tablet computer in 2015, according to new stats from eMarketer.

The research firm predicted that this year there will be 1.06 billion tablet users, more than double the figure recorded three years ago, with growth set to continue in the coming years but at a slower rate.

“The key takeaway is that growth in the global tablet-using population will slow dramatically in 2015 and continue to taper off,” said eMarketer.

The research firm predicted that as developed markets mature, tablet growth in emerging markets is not expected to “pick up much slack.”

It also noted that tablets continue to be perceived as luxury items and that they face increased competition from smartphones and connected devices including phablets, wearables and connected TVs.

eMarketer tips China to be the world leader in terms of tablet users in 2015, with more than 328 million users. The US is tipped to come second with 156 million tablet users this year, followed by India with 40.4 million users, while Brazil is due to overtake the UK to take fourth place with 34.7 million users.