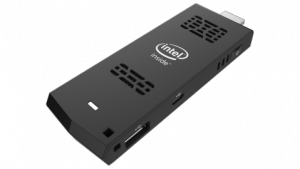 Intel has confirmed details of its new Compute Stick, an HDMI dongle that will enter the market against rivals such as Google’s Chromecast and Amazon’s Fire Stick.

Showcasing the device at the Consumer Electronics Show in Las Vegas this week, Intel said that the Intel Compute Stick will transform any HDMI display into a “fully functional computer.”

The device will come pre-installed with Windows 8.1 or Linux and will feature a quad-core Intel Atom processor, built-in wireless connectivity, on-board storage, and a micro SD card slot for additional storage.

“It’s everything you love about your desktop computer in a device that fits in the palm of your hand,” said Intel.

For consumers the device will support social networking, web browsing and streaming media such Netflix, Hulu or games, according to Intel.

The firm first unveiled the device at an Intel investor conference in Santa Clara, California, last November but did not give details of its capabilities beyond saying it could be inserted into the port of a smart TV or other monitor.

Intel said the device will launch later this year, and is reportedly gearing up for a March release.