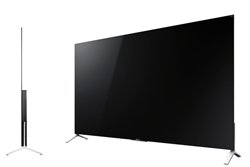 Sony has said that all of its new 4K and some new Full HD Bravia TVs will be powered by Google’s Android TV operating system, as it unveiled a host of new products at the Consumer Electronics Show in Las Vegas.

Showcasing its new line of Bravia 4K Ultra HD televisions, Sony said that these 2015 models will feature a new 4K Processor X1, designed to support current-generation HD video as well as 4K content that is broadcast and distributed in different video compression formats.

Sony also claimed that its new 4K TV models were its thinnest LED TVs yet at just 4.9 millimetres.

The TV sets’ Android TV OS also makes it easy to stream video, includes features like voice-enabled searching through a remote equipped with a microphone, and has the Google Cast feature built in, allowing users to stream content from their mobile device direct to their TV.

“Google has been expanding its Android OS from smartphones to new product categories, including wearable smart devices and TVs. In line with this, Sony Visual Products has decided to adopt this new platform for its Bravia line, thereby offering a seamlessly integrated experience with mobile devices like never before,” said Sony.

In total, Sony announced 11 4K Bravia LCD TV models, all of which will be available in spring. These include the XBR X900C Series, XBR-X930C Series, XBR-X850C Series and XBR-X830C Series.