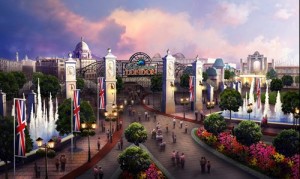 A new multi-billion pound UK theme park has signed a development deal with BBC Worldwide, in a move that could see it create rides based on popular BBC brands like Top Gear or Doctor Who.

London Resort Company Holdings (LRCH), the company behind the forthcoming London Paramount Entertainment Resort, said it has signed an agreement with the BBC’s commercial arm to feature the corporation’s intellectual property at the resort alongside that of leading Hollywood studio Paramount Pictures.

“The partnership agreement would mean that some of the best loved and celebrated programmes and characters to appear on British TV and radio in recent decades could be brought to life at a new world-class entertainment destination,” said LRCH.

The London Paramount Entertainment Resort is currently slated to open in Easter 2020 in north Kent.

Its separate agreement with Paramount Pictures will give the park access to more than 3,000 films including iconic movies like Mission: Impossible, Star Trek, The Godfather and The Italian Job.

In total, the theme park is due to feature more than 50 rides and attractions themed around famous films, TV programmes, games and other artistic works.

“We are delighted to bring the world’s leading public service broadcaster on board this project,” said David Testa, director of LRCH.

“The BBC has played an instrumental role in shaping the British entertainment industry for nearly a century, creating some of the most iconic and cherished characters on TV and radio. It seems only right therefore that its programmes will be present at the new London Paramount Entertainment Resort, which will combine the glamour of Hollywood with the best of British culture.”