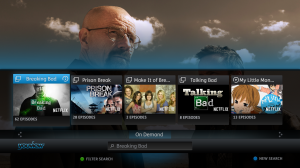 Rolling out today, the Netflix app will be available on Humax-made YouView boxes bought from a retailer, as well as on pay TV provider BT’s YouView-powered set-top boxes.

“Netflix is a brilliant addition to our already impressive line-up of TV programming. We are really excited about Netflix and giving YouView audiences even more choice,” said YouView CEO Richard Halton.

Existing Netflix subscribers can login to the player on YouView by entering their Netflix username and password using the YouView remote control.

BT first revealed that it had agreed to offer Netflix access to its TV customers last week. BT TV customers, who sign up for Netflix alongside BT broadband and TV offers, will also be able to pay for Netflix via their BT bill –a first for Netflix.