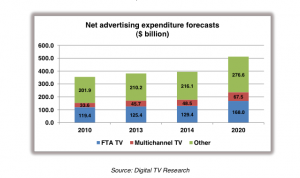 The study, which covers 55 countries around the world, claims that in 2014 alone ad spend will climb by 4%, driven in part by this summer’s World Cup and “economic improvement in much of Europe.”

The biggest TV ad market gains between 2010 and 2020 are tipped to come from Latin America and the Middle East and Africa where ad spend is expected to double.

“Excluding deflation-hit Japan, net TV advertising in Asia Pacific will also more than double between 2010 and 2020,” according to the TV Advertising Forecasts report.

From the US$64.4 billion TV ad spend that is set to be added between 2013 and 2020, Digital TV Research predicts that US$22.6 billion will come from the US, US$7.9 billion from China, US$3.7 billion from Brazil and $3.1 billion from Japan. The US will remain the global TV ad market leader “by some way” according to the report.