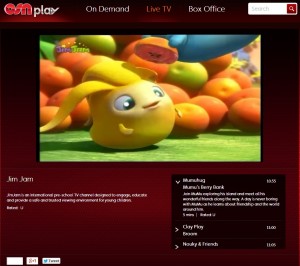 Middle East pay TV provider OSN has added three new live channels to its OTT TV service OSN Play and has claimed a 60% increase in subscriber registrations and a fourfold increase in viewership for the platform.

OSN said OSN Play has seen a 400% increase in viewership year-on-year along with a 60% increase in subscriber registrations. In addition to live channels, the service offer on-demand access to TV box sets including Games of Thrones, Hareem Al Sultan, and House of Cards, as well as movies from around the world. The service features interfaces in both English and Arabic.

“OSN Play has truly elevated the digital television sector by bringing value-added services that were never explored in this region,” said Emad Morcos, SVP, business development and digital at OSN.

“From the catch-up option to the flexibility and convenience available to subscribers, OSN Play is undoubtedly one of the network’s most popular additions. We will continue to expand the offering and further enhance the user experience.”

Meanwhile, UK research group Ovum has estimated that OSN’s subscriber base will increase from about 641,000 today to 2.1 million over the next five years. The group’s majority owner Kuwait Projects Company (Kipco) this week rejected a US$3.2 billion offer for its stake in OSN, reportedly from US private equity group Hellman & Friedman.