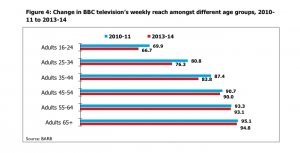 The BBC’s TV channel output should be more distinctive, collaborative and should appeal more to young, black, Asian and minority ethnic viewers, according to a BBC Trust review.

The BBC’s governing body, which yesterday published the conclusions of its review of BBC One, Two, Three and Four, said that it believed the BBC could continue to serve loyal audiences while taking “more creative risks in programming and scheduling choices.”

“Some viewers think that BBC One is too reliant on familiar programmes and that it appears to ‘play safe’ with programming and scheduling,” said the Trust’s service review of BBC Television.

“Our analysis of BBC One’s peak time schedule shows why some viewers might think this: nearly two-thirds of the pre-watershed weekday schedule is composed of a small number of long-established programmes, shown year-round.”

According to the report, the top BBC1 programmes shown between 7pm and 9pm by amount of airtime in 2013-14 were The One Show, EastEnders, Holby City, The Voice UK and Countryfile.

The review said that at a time of flat or shrinking budgets, the BBC should seek to serve all viewers by collaborating more between channels and other parts of the business to help maximise spending.

In terms of diversity, it added: “The reach of all public service broadcasters has fallen in the past 10 years. However, BBC Television’s reach has fallen most among younger audiences and black, Asian and minority ethnic viewers.”