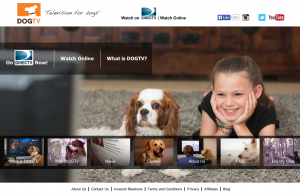 Discovery Communications has invested in, and formed a strategic partnership with, DogTV – a television network created for dogs.

DogTV says the deal will help to accelerate its growth and bring the channel to more regions and territories.

The partnership will also see DogTV collaborate with Discovery-owned network Animal Planet, with the firms claiming they aim to identify opportunities for the businesses to complement each other.

“More than 40 million American households own dogs, and they are spending more than US$55.8 billion (€40.4 billion) annually on their pets. It’s a thriving industry,” said Yossi Uzrad, chairman of DogTV.

Gilad Neumann, CEO of DogTV added: “DogTV is a proven tool for relieving stress and anxiety for stay-at-home dogs, and a partnership with Discovery will help accelerate the network’s growth, while making DogTV even more accessible to dog owners.”

DogTV said that it will use the undisclosed sum of investment to drive sales and marketing of the network. The company recently opened its North American headquarters in Silicon Valley, expanded its programming to South Korea, and has plans to launch in Japan and in other international markets later this year.