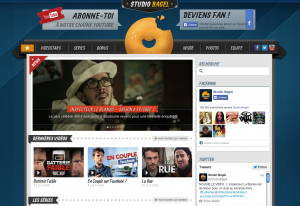 Studio Bagel, founded in 2012, takes the best comedy content from YouTube and produces a number of channels incliuding Studio Bagel, Le Tutos and Le Dezapping. Taken together, the channels count about six million registered subscribers and over 40 million views per month.

Studio Bagel founder and president Lorenzo Benedetti will continue to lead the company within the new Canal+ OTT division created in January under Manuel Alduy.

Canal+ said the acquisition of a stake in Studio Bagel marked a new stage in its move into the OTT world. It said Studio Bagel provides a production structure adapted to new web content formats that will bring new talents who can create content for both the web and TV into the group.

The move follows Canal+’ s launch of its CanalFactory network of YouTube channels last year and its acquisition of a minority stake in US web content creator Maker Studios.

“We’re very pleased with this agreement with Canal+ Group, which will allow us to jump to a new essential stage in our development,” said Benedetti.

“After having experienced rapid success, Studio Bagel wants to be able to allocate more resources to our numerous talents, as well as the possibility of developing new innovative TV and movie formats. In addition this agreement will allow us to benefit from the advertising sales expertise of Canal+.”