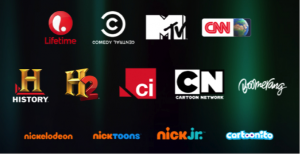 A new subscription streaming service is bringing channels such as Comedy Central, MTV and History to Freeview viewers in the UK.

VuTV is launching today on the Freeview EPG on channel 238 at a cost of £6.99 (€8.36) per month on Freeview HD web-connected TVs and set top boxes.

VuTV is the latest web-connected platform to launch in the UK. Others include the broadcaster-backed YouView and BSkyB’s NOW TV.

Bakori Davis, VP of commercial at A+E Networks UK, which jointly operates History, H2 and C&I with Sky, said: “We are delighted to see the launch of another multi-channel platform in the UK that offers more viewers a chance to enjoy the great content on our portfolio of channels, including Lifetime, our newest entertainment brand which launched this month.”

“Viacom aims to make its content and channel brands available on whichever platform our audience wants to access them, so it’s great news that Comedy Central, MTV and Nickelodeon will, for the first time, now be accessible via broadband connected digital terrestrial TV in the UK,” added Arran Tindall, senior VP, commercial and content distribution, VIMN, UK, Australia, Russia and Eastern Europe.

VuTV’s director David Cutts said the firm had been working with manufacturers for “some years, both to establish the specification for these TVs and to build the system to use them”.

“We are now finishing off the process of testing and approving the receivers in the market so we can enable more customers to receive VuTV. This is a continuing process and the list of devices that support VuTV will continue to grow,” he added.