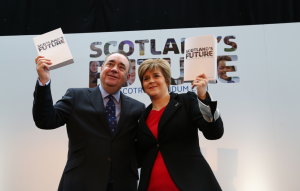 The Scottish Government will set up a new public service broadcaster called the Scottish Broadcasting Service (SBS), should Scotland win independence in its referendum next year.

According to a White Paper published yesterday by the Scottish Government, the SBS will provide TV, radio and online services and will be established as a publicly funded broadcaster, working with the BBC in a joint venture.

The new broadcaster will initially be founded on the staff and assets of BBC Scotland and will reflect “the variety of our nation in terms of geography, ethnicity, language, belief, lifestyle and taste,” said the white paper – called Scotland’s Future – Your Guide to an Independent Scotland.

Under the plans, Scotland’s licence fee will remain the same. However, the Scottish Government argued that it will see better value for money under the scheme.

“In 2011/12, BBC Scotland’s total expenditure was just over £200 million (€240 million) on all of its activities, compared to a contribution to licence fee income of £320 million from Scotland. BBC spending in Scotland is likely to fall to around £175 million by 2016 through the ‛Delivering Quality First’ programme,” said the white paper.

According to the proposals, the SBS will start broadcasting when the current BBC charter comes to an end on 31 December 2016. On TV, the SBS will launch a new TV channel and take on the responsibility for BBC Alba. It will also provide online services, including a catch-up player and news website.

“Currently, BBC Scotland delivers a range of original programming for the BBC network. We propose that the SBS should enter into a new formal relationship with the BBC as a joint venture, where the SBS will continue to supply the BBC network with the same level of programming, in return for ongoing access to BBC services in Scotland,” said the white paper.

This would mean that existing BBC services will continue, with the SBS “having the right to opt-out of BBC 1 and BBC 2 – when appropriate.” Current programming like EastEnders, Doctor Who, and Strictly Come Dancing, and channels like CBeebies, will still be available in Scotland, the Scottish Government said.

Under the plans, the SBS will inherit a “proportionate share of the BBC’s commercial ventures,” including BBC Worldwide, BBC Studios and Productions and BBC News and of their associated ongoing profits. Scotland’s population share of those profits ranges from around £13 million to £19 million per year, according to the white paper.

“Independence will mean almost doubling the level of public spending on public service broadcasting and production in Scotland,” said the Scottish Government, adding that “there will be no necessity for the SBS to raise revenue from advertising.”