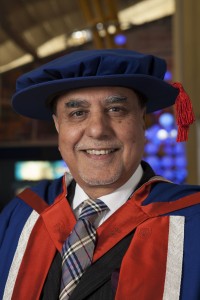 Subhash Chandra receiving an honorary doctorate from the University of East London.

Indian media giant Zee Entertainment Enterprises, the owner of Zee TV, is planning to launch its US-based lifestyle channel Veria Living TV in Europe for the first time next year.

Speaking to DTVE last week, Indian media mogul Subhash Chandra, the chairman of Essel Group and Zee Entertainment Enterprises, said that Zee is currently in discussions with TV platforms in the UK about launching the channel there, claiming it is market that is “ripe” for healthcare content programming.

“We should be launching in the coming early summer – maybe April, May, June kind of timeframe,” said Chandra.

He added that Zee was also discussing a Russian launch, with the firm in talks about taking a majority share in an existing health and wellness channel in this market, which it would then programme with Veria content dubbed into Russian.

Chandra would not give further details of these discussions, as the deal is yet to close, but said that all going well, this partnership could be in place by the end of the first quarter of next year.

He also said Zee was currently assessing the possibility of launching another English-language, global content brand in the factual entertainment space. “Within one year we will make the decision. Launch can take another one year,” he said.

The news comes as Zee announced it is teaming up with Stockholm-based VOD service Voddler to strengthen its standing in the online video space.

Under the deal, Voddler will build and operate a global online streaming solution of Zee’s premium content.

Slated for an early 2014 release, the Zee-branded service will initially focus on markets including India, the US and Indonesia. Under the agreement, Zee has also an option to invest USD$5 million in Voddler.

online, tablet and mobile platform that provides live streams and TV on demand from a host of Zee channels. This initially launched in India and has since rolled in international markets including the UK, Australia and New Zealand.

Discussing the new Voddler powered Zee service, Voddler VP of product and communications, Anders Sjöman, told DTVE “we are discussing positioning/branding of this vis-à-vis DittoTV.  For now though, and for sure during the initial stages of our collaboration, it is a separate site that will have a global perspective from the start.”

Zee is currently setting its sights on aggressive international expansion. The firm, which recently launched a new brand identity and corporate philosophy of ‘Vasudhaiva Kutumbakam,’ meaning ‘The World is My Family,’ already has 100,000 hours of programming available in 15 languages across the world. Its vision for 2020 is to double its current reach of 700 million viewers in 169 countries to reach a billion viewers.

Chandra, who was in London last week to receive an honorary doctorate of business administration from the University of East London, said that Zee is currently working on four categories of programme: South Asian programming; South Asian programming repurposed for given markets, dubbed or subtitled in different languages; local production in the local languages; and global programming, produced in English language and distributed globally, again dubbed in the local languages.

The last of these, he said, was currently Zee’s biggest focus as demonstrated by its plans to expand its Veria Living TV reach. The channel is currently available in the US and in late 2011 Zee created a US$250 million content development, production, co-production and acquisition fund for Veria Living as part of a five-year plan to expand Veria’s presence in the US and beyond.