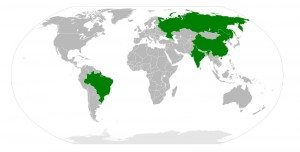 The global pay TV subscriber base will “eclipse 1 billion by 2018” driven by growth in the emerging economies of Brazil, Russian, India and China, according to new stats.

ABI Research claims that the BRIC countries will account for 68% of total net additional subscribers by 2018, and that by this year the pay TV market will generate service revenue of US$229.6 billion.

The firm’s latest ‘Pay TV ARPU and Revenues’ data says that at the end of Q3 2013, global pay TV subscribers passed 886.5 million, a 6% year-on-year increase. Service revenue in the third quarter amounted to US$62.6 billion.

In Western Europe, the pay-TV subscriber base in Q3 grew by less than 2% year-on-year, stunted in part by losses in the Spanish and Italian markets.

“Respectively, pay-TV service providers in Spain and Italy lost over 7% and 2% of their total subscriber base compared to a year ago. Operators blame the weak economic environment for declining subscriber counts, but it is not all doom and gloom in Europe as other markets, such as France, Germany and UK, contributed to regional market growth,” said ABI.

IPTV subscriber additions were the “prime driver of pay TV regional growth” with other pay TV platforms only seeing “marginal increases,” according to ABI.