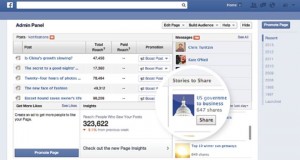 The average referral traffic from Facebook to media sites has increased by over 170% throughout the past year, according to new stats published by the social network.

Facebook said that over recent months it has worked particularly closely with news and publishing sites to help drive more readers to their sites. It has also started working with broadcasters to provide them with data mined form the site.

By running a seven-day trial with 29 media sites, Osofsky added that posting more frequently to Facebook increased referral traffic to by over 80%.

“Within that week, the media sites averaged an increase in the number of articles they posted to their pages by 57%. This resulted in an 89% increase in average outbound clicks to their domains. Additionally, the amount of Likes per post increased by over 10% and the number of net fans per page went up by 49%,” he said.

Earlier this month, Facebook announced that it had partnered with TV firms including TF1 and Canal+ in France, Channel 4 and Food Network in the UK and ZDF and ProSiebenSat.1 Media in Germany.