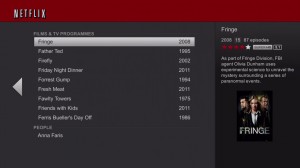 A pilot of the Netflix app on Virgin Media TiVo boxes will launch this week in 40,000 homes, with the service due to roll out to all Virgin Media’s 1.7 million TiVo customers later this year.

The deal will allow Virgin customers to watch Netflix movie and TV content – including Netflix original series like House of Cards, Hemlock Grove and Orange is the New Black – directly through their set-top box.

For the pilot, the Netflix application will be available in the Apps & Games section of the Virgin Media TiVo display with Netflix members able to log-in using their existing Netflix details. New members can also sign up for Netflix via the app.

The roll out follows Virgin Media’s addition of BT’s suite of new sports channels to its service last month, and joins Virgin Media’s existing collection of more than 6,000 hours of on-demand content.

Virgin said that its TiVo customers will be able to easily search and browse titles across Virgin TV’s entire collection of films and TV programmes, as well as from Netflix and other content apps including BBC iPlayer.

“The UK has given Netflix a fantastic welcome and we’re excited to be partnering with Virgin Media to bring an amazing Netflix experience to Virgin Media customers,” said Netflix’s global head of business development, Bill Holmes.

Dana Strong, Virgin Media’s chief operating officer, added: “Netflix is a fabulous addition to Virgin Media TiVo, enabling our customers to enjoy even more of their favourite shows and movies simply and easily – all through their TV set-top box and at outstanding value.”