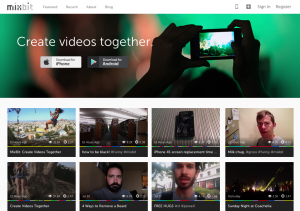 The app lets users record, edit and publish videos that can last from one second to one hour from their mobile, taking on new entrants in the short-form online video space like Instagram Video and Twitter’s Vine.

However, MixBit also claims to be the first site lets users collaborate with each other and remix videos uploaded by the community.

“When we built YouTube, we wanted to help people share their videos with each other and the world. Eight years later, people now upload 100 hours of video to YouTube every minute. Today we want to remove the barriers to video creation. That means giving people intuitive and flexible recording and remixing tools so it’s easier than ever to tell meaningful stories through video,” said Hurley.

Announcing the service, he said MixBit was aimed at “filmmakers, citizen journalists and everyone in between,” as well as for “people who enjoy playing with video in order to create something new and unexpected.”

The pair launched YouTube in 2005, selling a year later to Google, which paid US1.65bn for the video site.