Sky not betting on online commissions 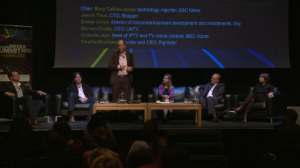 Sky has no plans to follow the BBC in commissioning programming exclusively for online, according to the satellite firm’s director of corporate business development and investments Emma Lloyd.

Speaking on a panel discussion at The Guardian’s Changing Media Summit last week, Lloyd said that Sky’s online strategy focused on partnering with “innovative companies like Zeebox” and enabling content producers to put additional content on the second screen – but not in making new shows specifically for it.

Referring to Zeebox, the companion app that Sky invested in back in January 2012, Lloyd said integrating this service into its Sky Plus app last year, allowing users to control their set-top box with it, was a significant step for the firm.

“We can really start to see what customers are doing – they’re logged in with Sky ID and that helps our programmers, it helps with scheduling, it helps with understanding what programmes are working, and it enables us to experiment – but at the moment we’re not going as far as the BBC in terms of originating content purely for digital,” she said.

The comments came as the BBC announced it had ordered a strand of six original dramas exclusively for the iPlayer through its youth-skewing network BBC3 in a bid to bring through new talent and showcase more content on the service.  Last month, the BBC also said that it plans to debut 40 hours of content on the iPlayer before linear TV. The first of these, announced today, is Car Share, a six-part BBC1 comedy that will be the first-ever series to premiere on BBC iPlayer in its entirety before a linear transmission.

Speaking alongside Lloyd on the conference panel, called Beyond the box: What does television look like in a social, mobile-first, user-centric world?, Victoria Jaye,BBC Vision’s head of IPTV and online content, said that the BBC’s online strategy was a “no-brainer” after it experimented by airing a string of online BBC3 comedy pilots last year.

“These pilots – we did seven of them in total – had a million views in the 10 days they were available on the iPlayer. They were more viewed than on-demand programmes from BBC3 during those 10 days, and one of those web pilots was the most-shared content in the whole of iPlayer in the month of July. So that gives us a good indication we’re onto something.”

Discussing its strategy, Darren Childs, CEO of UKTV, added that using the web to source new on-screen talent from sites like YouTube was a valuable resource, with social media helping to feed audience interest

“Dynamo, which has been one of our biggest hits, was discovered online. We brought him in and nurtured him and turned him into a big star and gave him a big audience, which has built his online presence. So his Facebook and Twitter presence is now in multiple millions of users, so we have an engagement model now as well,” said Childs.