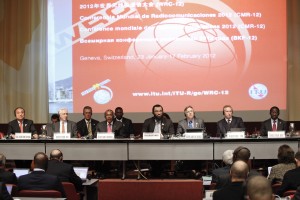 European radio spectrum policy is threatened by moves being made at the current World Radio Conference (WRC-12) in Geneva, according to the European Broadcasting Union (EBU).

The EBU has warned that the EU’s Radio Spectrum Policy Programme (RSPP), which is due to be approved this week by the European Parliament, is under threat because of moves by African and Arab regional administrations at the WRC to have the 700MHz spectrum band, used in Europe for broadcasting, to mobile services, according to the EBU.

“With the RSPP, the EU has adopted a balanced approach in spectrum management. This approach should not be put at risk during ongoing parallel discussions at this year’s World Radio Conference in Geneva,” said Jean-Paul Philippot president of the EBU.

Allocation of the 700MHz spectrum was not originally on the agenda for WRC-12, but pressure from the African and Arab delegates has resulted in discussion of its use for mobile applications. According to the EBU, this would cause significant disruption to digital broadcast services in Europe, where the 700MHz band is used for terrestrial broadcasting with, in many cases, long-term licences already in place. Use of this spectrum is also seen as crucial to the future development of the terrestrial platform.

The RSPP proposes a European spectrum inventory that identifies spectrum whose use could be improved, re-allocated or shared. According to the EBU, any mobile allocation in the 700MHz band would preclude the outcome of the spectrum inventory.

The previous WRC in 2007 had allocated the so-called digital dividend spectrum in the 800MHz band to be made available for mobile services after digital switchover. However, in Africa and the Middle East, the 800MHz band is already widely used for government applications, while few countries have implemented digital-terrestrial broadcasting. A number of national regulators in Asia and the Americas have already allocated 700MHz spectrum for mobile broadband services, following WRC 2007.

WRC-12 is set to conclude at the end of this week.