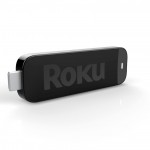 Over-the-top TV specialist Roku has announced plans to launch the Roku Streaming Stick, a wireless USB stick that can be plugged into a TV to make it connectable.

The streaming stick, which will be launched in the second half of this year, will feature built-in WiFi, a processor, memory and Roku’s smart TV software. It can be controlled by the TV remote and will provide access to Roku streaming channels.

The device will only work with TVs that have MHL-enabled HDMI ports. This is currently available only on some Samsung and Toshiba TVs, although the MHL standard, which uses the HDMI connector to provide power and other elements required for streaming, has also been adopted by manufacturers including Sony and Nokia.

The product has been endorsed by US consumer electronics retailer Best Buy, which plans to roll out MHL-enabled Insignia-branded TVs compatible with the streaming devices later this year.

Netflix has also endorsed the product. “The Roku Streaming Stick offers another innovative option for members to enjoy the Netflix experience,” said Greg Peters, vice-president of product development at Netflix.

Separately, internet TV specialist Brightcove is launching a new interactive app for the CBS-owned Showtime network in the US that delivers free sample episodes from hit series to Roku devices via the Brightcove Video Cloud online video platform.