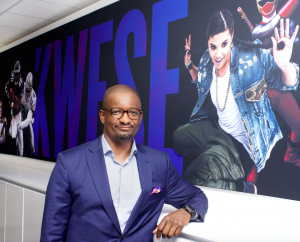 This year has seen the introduction of a major new player to the African pay TV space. Kwesé TV started to roll out its direct-to-home (DTH) satellite offering in January, taking on incumbent MultiChoice with a flexible TV package aimed at middle and upper middle class customers.

Kwesé lets viewers opt for three-day, seven-day or monthly pay TV packages and its DTH service complements both free-to-air sports and over-the-top and mobile offerings, the latter of which is still being developed.

Launched by Econet Media, a subsidiary of global telecoms provider Econet Wireless, Kwesé TV targets both the growing African pay TV market and Africa’s huge youth audience. However Kwesé’s route to market has not been entirely smooth and its first launches came more than a year after Econet Wireless owner, Stive Masiyiwa, announced plans for a sub-Saharan TV service that would offer a range of sports and entertainment, including to mobile users.

Econet Media president and CEO Joseph Hundah explains that the journey the company went on for the launch of Kwesé TV started “almost three years ago” and admits that 2017 has been “a difficult year for many reasons”.

While the timing of Kwesé’s rollout “couldn’t have been better”, it was not necessarily deliberate, says Hundah. “As you know it really takes a long time to get the right people in place, the right amount of content, [and] building up some credibility in the market,” he says.

Kwesé TV initially launched at the start of this year in a handful of smaller African markets such as Rwanda, Lesotho, Zambia, and Ghana. However, its full launch plans had to be revised after the company entered into a strategic transaction that “didn’t work out”. Though Hundah won’t go into details, he says that this episode caused delays that put its subsequent launches back by about six months.

Fast-forward to the latter part of September and Kwesé started to go live in more markets, including some of its biggest territories. Services in Kenya, Zimbabwe, Nigeria, Botswana and Uganda are all now live and by the end of November Hundah estimates that Kwesé TV will be available in about 15 markets across the continent.

At the time of this interview, the only holdouts were Tanzania and Ethiopia. Tanzania is the only market Econet Media is yet to secure a licence – though Hundah is confident it has met all the necessary criteria – while Ethiopia, he says, is “quite a difficult market to enter in general”.

“For us, it has really been almost a whole year we’ve spent refining and testing our business, based on the markets in which we were in,” says Hundah. “But I believe that we’ve now entered into the markets that we will see real growth. This is the high-population markets with good penetration of TV households.”

Hundah says that while the 2017 launch may not have been deliberate, it was nevertheless good timing, as a number of sports and content rights fell into their renewal phase in 2016 and 2017. This allowed Kwesé to snap up free-to-air rights to high-profile sports like English Premiere League football, NBA basketball and NFL American football and launch the fully free-to-air sports channel, Kwesé Free Sports. This started broadcasting last year and preceded all of Kwesé’s pay TV rollouts. As a result, sport has become key to establishing the Kwesé brand.

Kwesé Free Sports now broadcasts in some 10 countries across Africa and it has affiliations in another 20, meaning it provides programming blocks to partner channels. “Our intention was to become the biggest free-to-air channel in Africa, and we’ve achieved it,” says Hundah, claiming that the channel rules the African free-to-air space in terms of both viewership and geographical reach.

Hundah explains that the channel has served a tactical purpose by introducing the Kwesé brand to a much wider audience than the pay TV subscriber base it is now targeting. “The brand is out there and people understand and associate Kwesé with quality,” he says. “As we are launching our pay TV business, we are finding that the penetration of the market is much easier, because the brand is already well known in the market. I think from that perspective we have achieved what we wanted to achieve with our Kwesé Free Sports platform.”

Outside of sports, Kwesé TV’s content line-up has focused on a relatively slim offering of channels, compared to the hundreds of networks offered by many its pay TV counterparts in western Europe or North America. Hundah says that by the end of November, Kwesé will offer roughly 75 channels, of which around 30% will be exclusive. With the launch of two new family-oriented channels it will also have over 10 branded channels covering movies, kids content, lifestyle programming and more.

“As you know, in pay TV, the more exclusive channels you have, the more traction you are likely to have in terms of acquiring subscribers,” says Hundah. “We’re happy with the balance of our bouquet. It’s not large – deliberately so. We’re quite comfortable with our 75 [channels], and we believe that we are better off with more quality than having quantity. That’s what we planned for, from a channels-spread perspective.”

Vice Media announced in January that its Viceland channel would launch exclusively in Africa with Kwesé TV and at MIPCOM this year the two companies expanded their partnership by launching Kwesé Vice. This joint venture will focus on developing, producing and distributing local content and original video programming – both for Kwesé Vice’s channels and third party platforms. The venture is due to launch in 2018 and will involve the establishment of a new bureau and production studio in Johannesburg, South Africa.

From its own branded channel stable, Kwesé’s line-up includes Kwesé Info, Kwesé Prime, Kwesé Stories, Kwesé Know, Kwesé Kids, three Kwesé Movies channels, and two Kwesé sports channels on top of its free sports offering. For these, it has active plans to make its own original productions. “I’m fully of the belief that without local content, competition is going to be difficult,” says Hundah. “We’ve already commissioned about eight shows that will go into our owned content portfolio, and we’ve tried to cover all genres.”

“We’ve done two dramas, we’ve got some lifestyle shows, some entrepreneurship shows. Our next step is probably to do something with shiny-floor [studio entertainment] formats. But local content is absolutely key in Africa and our strategy has to include how we develop that part of our business quite quickly.”

For the free-to-air Kwesé Free Sports channel, Hundah says that the plan is to completely customise by country so that it has local content in markets such as Kenya, Botswana and Zambia. On the general entertainment front it will take a different approach, focusing on creating local shows for larger markets first.

“Our intent is not to go local in every single market – it’s just not viable,” says Hundah of the local entertainment plans. “Sometimes you have to start something and learn your lesson before you perfect it. We certainly are taking it easy initially, because we want to get it perfected with the local productions unit and how they operate. Then from there we will proceed to rapidly expand.”

Kwesé is a pay TV operator that is taking various routes to market. Kwesé Play is its over-the-top streaming service primarily aimed at a high-end demographic – owing to the fact it relies on users having uncapped broadband connections.

Currently available in South Africa, Hundah says the service should be available in some 10 markets by the end of the year and that the next phase of its growth will involve partnering with the major African internet service providers. Hundah says that allowing them to offer Kwesé Play to their broadband subscribers will help create “stickiness and traction”.

Kwesé Play is available with the backing of some high profile partners. The Kwesé Play box is provided and powered by Roku, as part of a ‘Roku Powered’ deal between Econet Media and the streaming platform provider. “The reason why we partnered with Roku was because they have most of the online streaming services already integrated into their box,” says Hundah, claiming this made it “so much easier to launch”.

While Roku supports more than 2,500 streaming services, Hundah explains that for Kwesé Play it decided to launch with a curated line-up of roughly 100 channels – with the notable inclusion of Netflix as an ‘anchor tenant’ on the platform. “It has taken us two years, but eventually we’ve signed a distribution deal with Netflix for the African continent,” says Hundah. “We’re still very much in our infancy, but the plan is obviously to add more services on the pay side of the platform.”

The Kwesé Play line-up includes services like TED, Red Bull TV and YouTube and was based around the idea that Kwesé should not launch its own VOD offering for the platform. “I think if Netflix do what they do in terms of creating local content, they will win the space along with Amazon and there could be one or two more,” says Hundah. “It didn’t make strategic sense for us to compete with them. However, what we decided to do was to partner with them.”

Hundah believes “there’s a good future for this part of the business”. Expanding with the help of ISP partners will help Kwesé Play to gain traction, especially with the price of connectivity in Africa “dropping quite significantly on an annual basis” as LTE and cable rollouts continue.

Kwesé also has a mobile plan in the offing. This will be based around a mobile-specific app, targeted at the youth market. Econet already has a wide footprint across the continent and Hundah says that Kwesé has signed deals with other major mobile operators working in Africa -– including Vodacom, Vodafone, MTN and Tigo – to supply them with content.

“We are still refining the mobile strategy, but we intend to launch the mobile product, probably by the middle of November if everything goes well,” says Hundah. “In essence the idea is to give this content to our mobile network operator partners for them to exploit, because obviously they’re looking at ways to increase data usage and we are looking for ways to target a market that we think might never own a satellite TV subscription.”

According to UN data, Africa has the youngest population in the world, with the median age just 19.7 years old. Hundah says that Kwesé’s aim is to reach this mobile-centric audience with short-form, mobile-optimised content – including sports highlights. He says Kwesé is “working aggressively towards” realising these plans.

Hundah concedes that competing against MultiChoice, which has had more than a 20-year head start in the African market, will be tough. But he believes Kwesé has built a strong product and has made strong progress in a short space of time. By targeting an affluent audience of young Africans aged 15-39, Kwesé is carving out a compelling proposition.

“We are cognisant of the fact that the population is a young population,” says Hundah. “We’re trying to build a product for the future.”