Central and eastern Europe has seen strong digital growth in recent years. DTVE’s CEE 2010 presents a statistical snapshot of the region, and in the following pages looks at possible growth patterns over the next few years.

Pay-TV services are starting to take off in the region, and the number of pay-TV homes is expected to reach 81.6 million – about half the total TV households – in 2015, up from 65.4 million at end-2010. Russia will supply 28.4 million of the 2015 total, with Poland on 13.1 million and Romania on six million. Cable TV penetration is seemingly flat in the region – with about 24% of homes expected to take cable services by 2015. Cable has been hit by the attractions of other pay-TV platforms and, more recently, rapid DTT take-up. Pay DTH services will have 19% penetration by end-2015, with DTT and IPTV at 24% and 5% respectively.

The cable market in central and eastern Europe is still fragmented in several territories, with many operators too small to upgrade sufficiently quickly to combat telcos offering TV services as part of bundled packages or, at the other end of the scale, free or near-free DTH packages and DTT expansion. However, cable operators are attempting to rectify this. Almost half of the region’s 40 million cable homes will take digital packages by 2015, up from only 18% in 2009. Russia will contribute 7.2 million of the 2015 digital total, followed by Poland with 3.3 million, and the Ukraine and Romania with 1.5 million respectively. 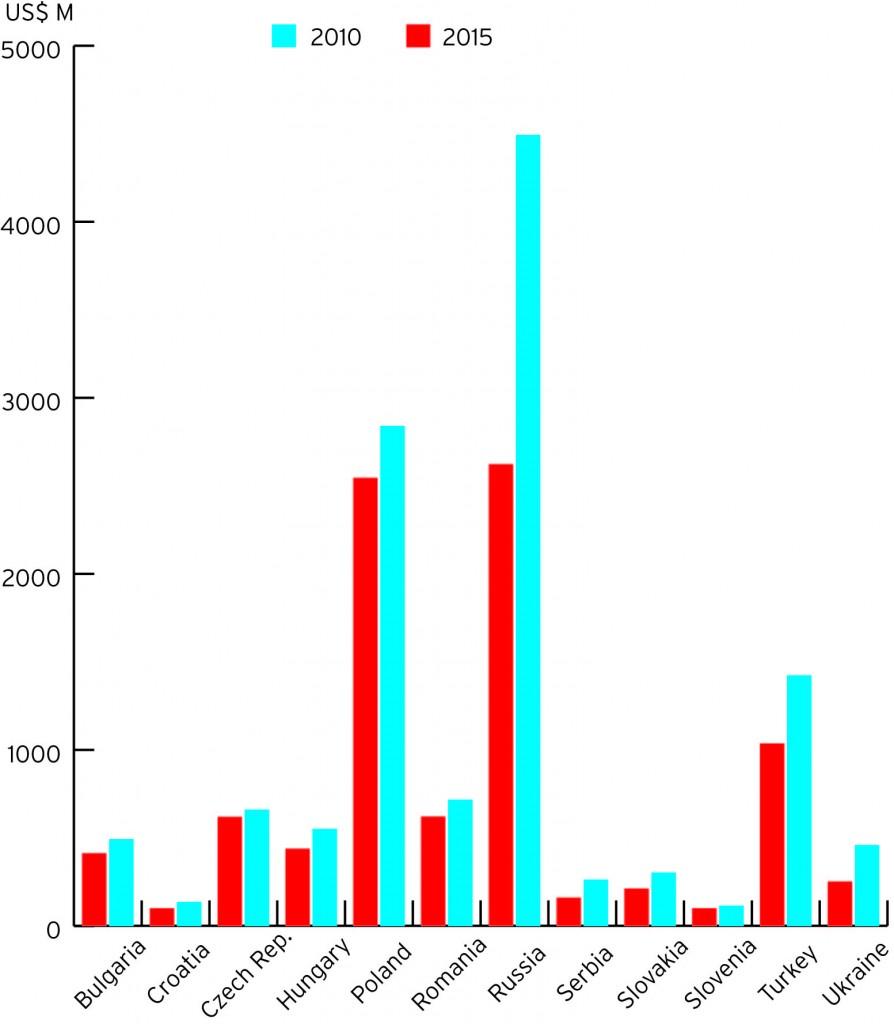 The growing necessity to push upgrades means that only 27% of digital cable subscribers will be TV-only subscribers by 2015, with the other 73% signing up for their TV in dual- or triple-play bundles. Subscribers are likely to be attracted to bundled services, in part, by lower rates for TV services, meaning the 73% of multi-play subscribers will generate only 48% of TV subscription revenues – with standalone TV subscribers accounting for the other 52%. In comparison, only 2.5% of IPTV subs will be standalone by 2015, though they will bring in 6.6% of IPTV subscription revenues.
Cable TV revenues are expected to reach US$5.7bn by 2015, up only from US$5.1bn (€4.3bn) in 2010. However, digital cable TV revenues will be US$3.4bn by 2015, nearly double the 2010 total. Russia is expected to account for US$1.1bn of the 2015 cable total, followed by Poland on US$600m.

Pay-TV revenues more generally are forecast to increase by 51% in the 2009 to 2015 period to US$13.6bn. ARPU will increase in the short-term as the number of services on offer – and the subsequent tiering and introduction of pay-per-view and video-on-demand packages – rises. But ARPU growth is likely to slow and go into decline in some sectors as the impact of dual- and triple-play bundles pushes down prices.
Russia and Poland are eastern Europe’s revenue powerhouses, accounting for half the region’s expected US$10.3bn pay-TV revenues this year. Their position is likely to become stronger, together accounting for an expected 54% of pay-TV revenues in 2015. However, Polish revenues are expected to peak in 2014 and Czech revenues will peak as early as 2012.

IPTV is making fairly good progress in some markets including Slovenia and Croatia. The circumstances for IPTV are most positive where broadband capacity has been upgraded to provide sufficiently-robust networks to handle the technology. Where this is coupled with attractive content rights, IPTV has a realistic chance of attracting subscribers away from cable and satellite.

While IPTV can succeed as a standalone TV business, this will be the business model in only a minority of cases. More common will be for IPTV to be used as a customer retention tool as part of a bundle of attractively-priced services. This will push down TV ARPU, as IPTV will only rarely compete head-on for premium pay-TV subscribers.
DTT rollout is finally taking off in the region, though some governments’ stated analogue switch-off dates still appear optimistic. The number of primary DTT households (those not subscribing to cable, DTH or IPTV) will reach 40.8 million, 24% of household, by 2015, up from only 2.7 million last year. The total number of DTT households (including DTT as secondary sets) will be 65.3 million in 2015, 38% of homes, compared to 3.4 million in 2009. A lot of this growth is due to rapid take-up in Russia, which will account for more than half the primary DTT homes by 2015 and will have 40% DTT household penetration.

Czech cable TV subscriber numbers have been stagnant for several years, although an increase was reported for 2009. This suggests that there is still room for subscriber growth over the next few years, although the medium-term expectation is downwards and penetration is expected to peak at 26% in 2011 before falling to 23% by 2015.
Digital cable launched in 2006 and, backed by UPC’s commitment to upgrades, by 2015 some 80% of cable subscribers, or 843,000 homes, are expected to take digital services. Total cable revenues will reach US$321m in 2015. The dual- and triple-play options available via a digital subscription will push down the price of the TV component in a multi-play service, meaning digital cable will likely account for US$214m, or 67%, of total cable revenues in 2015.
With less than a quarter of homes likely to be connected to cable by 2015, there are prospects for other platforms. But the relatively low cable penetration rate is partially explained by a low disposable income for a large segment of the population. Despite this, 16% of homes are forecast to subscribe to digital DTH by 2015, representing 728,000 households. These subscribers will create revenues of US$206m.

An upgrading cable sector, combined with consumer expenditure constraints, puts some limitations on the potential for IPTV. But the heavyweight backing of Telefonica means that by 2015, some 606,000 homes, or 13% of the total, will take these services. These households will create revenues of US$120m.
The Czech Republic introduced digital-terrestrial TV in 2005 and 37% of TV households, or 1.7 million non-cable, IPTV and satellite homes, are forecast to take these services by 2015. By that time, 95% of homes will have digital TV services.

Poland is regarded as the most developed country in the CEE region. Digital penetration is relatively high and TV subscribers can access a number of HD channels, VOD and other interactive services.

Almost a third of TV households subscribe to cable TV and while subscriber numbers are expected to grow slowly in the short term, by 2015 they are expected to be in decline as competition from other platforms intensifies. By 2015 the penetration level is expected to have fallen to 29%. The sector will however benefit from digital upgrades, with operators offering a wider choice of services, including VOD, internet access and telephony, although this will serve to reduce the value of the TV component in multi-play bundles. 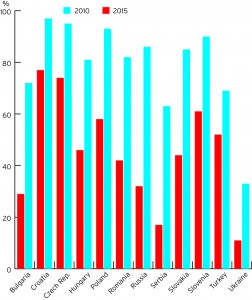 Poland is forecast to have 4.4 million cable subs by 2015. Given UPC’s commitment to upgrades, by 2015 some 75% of cable subscribers are expected to take digital services – or 3.3 million homes. Total cable revenues are expected to reach US$996m by 2015, with US$127m coming from VOD services.

With less than 30% of homes subscribing to cable by 2014, there is plenty of scope for the thriving DTH sector. Having overtaken the cable TV subscriber total in 2008, by 2014 about 7.9 million homes are expected to subscribe to a digital DTH package – or 53% of TV households. The digital DTH sector is expected to generate annual revenues of US$1.78bn in 2015, by which time there is likely to have been significant consolidation.

With IPTV having launched in 2006, some significant backing for the technology should produce a degree of success, with five per cent of TV households forecast to receive IPTV signals by 2015. These 728,000 homes will likely create revenues of US$69m, of which US$26m will come from VOD.

DTT trials have been taking place since 2001 and while a commercial launch has appeared to be near several times, on each occasion it has been delayed by regulatory issues. DTT should launch this year and by 2015 about 10% of TV homes are expected to rely on DTT signals.

Cable/MMDS penetration is in decline in Romania. From 48% of TV homes in 2006, it fell to 41% by the end of 2009 and is expected to reach 37% by the end of 2015. At that time half of cable subscribers are expected to subscribe to digital packages, resulting in 1.5 million digital cable homes. By 2015, total cable revenues are forecast to reach US$421m, with US$60m coming from VOD.

The country’s cable market is being hit by competition from DTH operators, of which there are five. Despite only having entered the market in 2004, DTH has already made an impact and is forecast to have 2.7 million subscribers and revenues of US$267m, by 2015.

IPTV debuted in Romania in 2007 and is expected to have only a limited impact, although Romtelecom’s entry in late 2009 should spark greater interest in the service. With 249,000 homes by 2015, IPTV is likely to reach three per cent of TV households by the end of that year. DTT trials began in 2006 but commercial services have continually been delayed. Assuming a launch proceeds in 2010, 2.3 million homes are likely to take DTT as their primary TV signal by the end of 2015.

Some 13 million Russian homes currently subscribe to cable or MMDS networks of variable sophistication and this figure is expected to grow to 14.7 million by 2015, representing 27% of TV households. Almost half of these cable homes will receive digital signals. By 2015 cable revenues are expected to reach US$1.7bn, with annual VOD revenues set to reach US$280m by 2015. Of the US$1.7bn total value, subscribers to digital cable will contribute US$1.1 bn.
The relatively low cable penetration is an advantage for digital DTH. NTV-Plus made some early inroads, although the low-cost (or free) offering from Tricolor TV has made some eye-catching progress more recently and has established itself as the pay-TV leader. Its business model acknowledges, however, that a premium DTH subscription is beyond the means of many Russians. By 2015, 10.7 million homes are forecast to take pay-DTH services, or 19% of TV households. These subscribers will generate revenues of US$2.3bn.
IPTV launched in Russia in 2005 through Sistema’s Stream TV, with other players now launched or set to follow shortly. Penetration is forecast to reach six per cent of TV homes by 2015. These three million homes are forecast to generate revenues of US$41m.
A St. Petersburg-based DTT service launched in 2002, but was put on hold in 2004. National rollout resumed in 2009 and it is estimated that there will be 21.8 million households using DTT as their primary TV service in 2015, representing 40% of homes.

Digital TV has made only limited progress in Ukraine so far. Informa Telecoms & Media predicts a near four-fold increase in the period to 2015, but this will still see only 33% of TV households having digital TV by the end of that year. Pay-TV penetration is a little more advanced, although predominantly limited to low-cost cable services.
Cable TV subscriber numbers are in slow decline and the 19% penetration at the end of 2009 is forecast to fall to 18%, or 3.25 million homes, by the end of 2015. Digital cable has started to make some progress and is expected to account for 45% of cable TV subs by the same period. Cable is forecast to be generating annual revenues of US$286m, including US$57m coming from VOD services.
Pay satellite and IPTV are both expected benefit from cable’s slow decline. By 2015 pay DTH is forecast to have 722,000 subscribers, by which time it will be generating annual revenues of US$114m, including US$16m from pay-per-view. An additional 813,000 free satellite homes will give DTH 9% penetration in total.
IPTV is forecast to have 717,000 subscribers by the end of 2015, when it is expected to generate annual revenues of US$61m. Digital-terrestrial TV has been available in Ukraine since late 2008 and by the end of 2015 some 2.2 million homes are forecast to be taking it as their primary TV service, although a further 3.3 million are likely to take it on secondary sets.