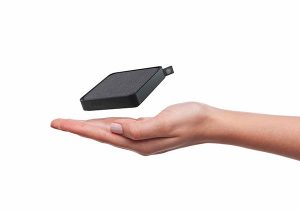 Liberty Global made an intriguing announcement this week in the launch of its new set-top box, the 4K Mini TV Box.

Launching first in Poland via UPC Polska, the was Commscope-manufactured unit promises to be Liberty Global’s ‘greenest-ever set-top box’ – a device made from 35% recycled plastic with no single-use plastics in its casing and reduced energy consumption by 77% when compared to previous set-top boxes.

However impressive these claims may be, the most interesting aspect of the 4K Mini TV Box is not necessarily its green credentials but rather its form factor as Liberty Global’s first all-IP device.

Unlike the standard fare from Liberty Global, there will be no cables or satellites involved in content delivery, with the company promising full access to live TV, replay TV and on demand content via access to a range of in-built OTT apps built on Liberty’s Horizon 4 next-gen TV platform.

While it is seemingly underpowered, the company is confident that it will deliver the full experience expected of a Liberty Global product. Enrique Rodriguez, chief technology officer, said: “Our new 4K box is very small in size, but it packs a mighty punch, giving our customers a cutting-edge 4K viewing experience across the full spectrum of live, on-demand and streamed content. Moreover, the 4K Mini TV Box combines technological innovation with our long-standing commitment to sustainability, delivering a world-class viewing experience while reducing energy consumption and use of plastics.”

Sam McLaughlin, senior research analyst of service provider technology at Omdia says that the move to create an all-IP product is indicative of the shifting market.

“Liberty Global has faced aggressive competition from IPTV operators in recent years and delivering video over IP will be core to its strategy going forward, in order to retain and expand its customer base beyond its traditional cable network footprint,” he says. “This is part of a broader trend across cable operators to expand into, and eventually transition towards, IP.”

In addition to reducing complexity and ultimately saving on duplication of effort in a world where content is increasingly consumed on multiple screens, that shift to IP also enables operators to offer more choice to customers in how they receive services. One example came from Altice Europe-owned Portuguese IPTV service provider Meo which this week announced the launch of an Android TV set-top box alongside its existing Apple TV box offering. 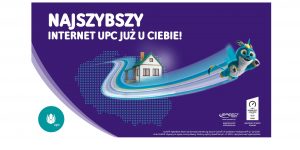 While Poland may seem like an unusual choice of market, the Liberty Global product’s reveal came shortly before UPC Poland  provided an update on  its plans to extend its reach via fibre-to-the-home by 1.7 million homes. Tapping the country’s Digital Poland initiative (Operacyjnego Polska Cyfrowa), UPC Polska should reach almost five million homes by 2024 with speeds of up to 1Gbps.

Poland could provide a perfect opportunity for Liberty Global to experiment with a new delivery format that is both cheaper for customers and less expensive to deploy. Rival operator Vectra this week launched its first Android TV set-top box, adding to two IP-based devices it has already launched to its customer base.

McLaughlin comments that the launch also fits into the broader strategy of Liberty Global in the country: “UPC Polska’s strategy this year has been focused on building up its fibre network and widening the reach of 1Gbps internet access. It has additionally been cooperating with rival operator Inea to expand its range of services through a network sharing deal. This expanded footprint makes Poland an ideal market in which to launch a pure IP box.”

Still, there remain questions on whether UPC Polska will duplicate services in an adaptive bit-rate OTT tier while still running DVB-C broadcast or if it will phase out the latter to entirely focus on IP.

There are also questions over whether UPC Polska will focus its efforts into making the 4K Mini TV Box its primary pay TV product, or whether it will treat it as an entry-level skinny offering in a similar vein to how Sky operates Now TV in the UK.

Omdia’s McLaughlin says that “depending on intended strategy, this box could be rebranded and launched in any of Liberty Global’s markets. UPC Slovakia has yet to launch a 4K box so this market could follow soon.”

He adds that being built on the Horizon platform will allow for flexibility in deployment: “It could be offered as a complementary OTT subscription service like Now TV, or they could shift towards offering the full Horizon service on it. It could also be used as a Thin Client set-top box in other Liberty Global markets for customers who already have the Horizon Multimedia Home Gateway.”

It’s not easy being green 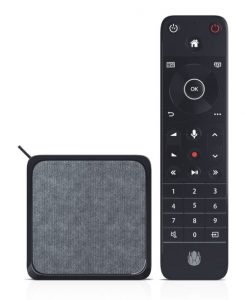 While the big move for Liberty Global is the focus on IP delivery, the eco-conscious aspect of the 4K Mini TV Box should not be downplayed.

In a year when Sony and Microsoft are set to release the most power-hungry generation of games consoles ever and when consumers are becoming increasingly conscious of their environmental impact, many will welcome a device which promises a premium experience without the clunky impact on an energy bill.

McLaughlin agrees that “this should be a selling point for some consumers as it is part of a trend of pressure for companies to conduct business in a more environmentally aware manner.”

He continues that the environmental considerations are not just being made as a selling point for consumers, but that there is a business case for being eco-conscious. “STBs cause service providers numerous sustainability problems,” he says. “These include pollution from production, carbon footprint from deployment, plastics-overuse, e-waste from short lived electronics products, and power consumption from operations. We will see more STBs made with sustainable materials and processes and designed with greater power-efficiency and repairability in mind.

“There will also be opportunities for vendors to monetise this repair and refurbishment, perhaps even transitioning to STB-as-a-service type business models.”

Going forward, it looks likely that Poland is not a one-off and that the 4K Mini TV Box will indeed make its way into other markets sooner rather than later. Given its renewed focus on Western Europe through the acquisition of Sunrise in Switzerland and the ‘on track’ joint venture with Telefónica in the UK – along with the environmentally-focused strategic shifts from its rivals – the future of Liberty Global looks to be one which is both ecologically and economically conscious.