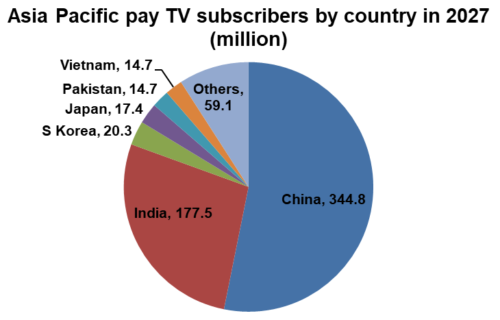 The Asia Pacific pay TV sector is set to add 26 million subscribers over the next five years.

According to a new report from Digital TV Research, while the region is set for a significant uptick in subscriber numbers, pay TV penetration will stay at two-thirds of TV households.

South Korea will be in third place by a significant distance with a total of 20.3 million subscribers. This will be followed by Japan with 17.4 million and Pakistan and Vietnam with 14.7 million each.

IPTV will add 65 million subscribers in the next five years to take it to 337 million. This growth will largely be dominated by China where cable subscribers are cutting the cord and in India.