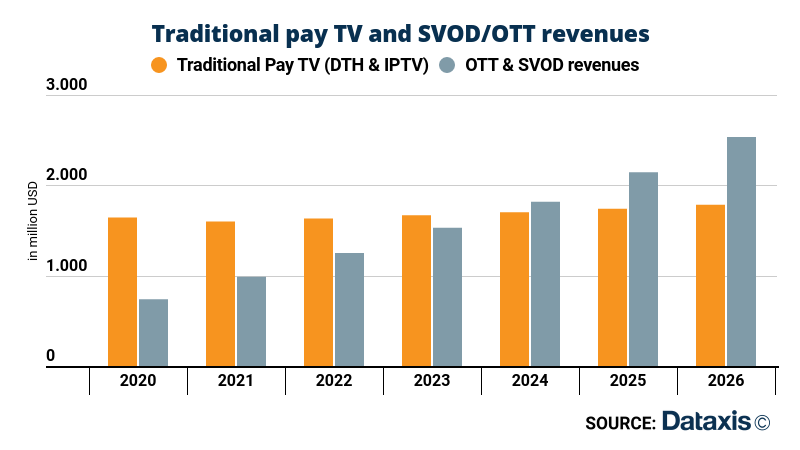 OTT revenues are set to overtake pay TV in the MENA region over the coming years.

According to new figures from Dataxis, the growth of local players such as Shahid VIP, Starzplay and OSN along with international streamers such as Netflix and Amazon Prime will see OTT become the driving force in TV within five years.

In the traditional pay TV market, the share of DTH pay TV subscribers has stagnated in recent years and DTH revenues are gradually declining in MENA. The SVOD market meanwhile has grown by 36% in 2020 and is expected to reach 45.6 million subscribers by 2026 for the overall region. OTT revenues are set to surpass pay TV revenues by 2024, exceeding US$1.9 billion across the region.

The report goes on to note that part of the reason behind this shift is that a range of international SVOD players, who had initially preferred to access the market through their TV networks, are now reconsidering offering their services direct-to-consumer. One example of this is Disney+, whose originals have been distributed by OSN but the streamer will launch in MENA by winter 2022.

However, the report concludes that pay TV and OTT in MENA remains a ‘two-tiered industry’ divided by the Gulf States where 5G and fibre are being rolled out rapidly, and North African and other Middle Eastern countries where both pay TV and SVOD penetration remain low.