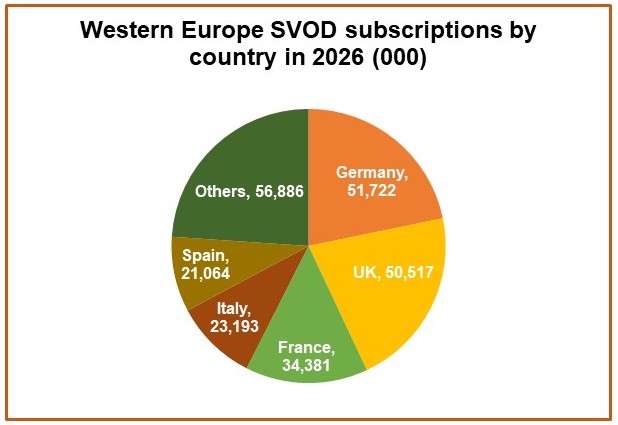 Germany is set to overtake the UK as the largest European SVOD market within the next five years.

In terms of total subscriber numbers, Digital TV Research estimates that Germany will hit 51.72 million SVOD subscriptions by 2025. The UK – currently the largest market in Western Europe and Europe overall – will lose ground to Germany with some 50.52 million subscriptions.

The region will grow by a total of 71 million – buoyed by 17 million adds in Germany, 10 million from Italy and France respectively and 9 million from the UK.

In terms of services, Netflix will continue to be the largest player with 67 million subs – up 10 million in Western Europe. Disney+ will double its base to reach 53 million subscribers in the region by 2026, while Amazon Prime Video will maintain a narrow lead over the Disney streamer.

Simon Murray, Principal Analyst at Digital TV Research, said: “HBO Max will have a limited impact in Western Europe, with 3.2 million paying subscribers across seven countries by 2026. It is not expected to start in several key European countries due to existing long-term deals with pay TV operators.”