Eastern Europe predicted to double its SVOD base

Eastern European will double its total SVOD subscriber base over the next five years, according to the latest report by Digital TV Research. 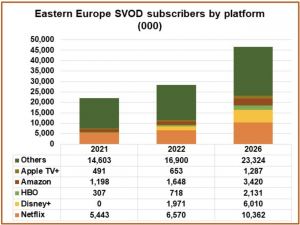 The research outfit forecasts 47 million SVOD subscriptions in Eastern Europe by 2026; more than double the 22 million at end-2021.

Russia will have 20 million subscriptions by 2026, up from 11 million at end-2021, according to Digital TV Research.

Netflix will reach 10.36 million subscribers by 2026, double its 2021 total. Its Russian subscriber base will climb due to its partnership with National Media Group, according to the research outfit.

Disney+ will have 6.01 million subscribers by 2026 despite only starting in mid-2022, according to the report, while HBO Max will reach 2.13 million paying subscribers by 2026, having officially started at the same time as Disney+.

Simon Murray, Principal Analyst at Digital TV Research, said: “After several delays, Eastern Europe’s SVOD sector will take off from 2022. This is prompted mainly by launches from Disney+, Sky Showtime and HBO Max. There is plenty of room for growth beyond our forecast period as only a fifth of TV households will pay for at least one SVOD platform by 2026.”