Average total daily viewing time went up in major advanced markets last year, with total long-form online viewing, the share of viewing time for online platforms and the proportion of viewing time on non-linear content all increasing, according to a new report by Omdia.

According to the Cross-Platform Television Viewing Time report from DTVE’s sister research outfit, average viewing time in the US, Australia and the top six European markets increased by 44 minutes year-on-year in 2020 to stand at six hours. Excluding social media viewing, the total stood at five hours and 10 minutes, up 36 minutes year-on-year.

While average linear viewing time increased in most of the markets studied – Australia and the US were exceptions – during a year dominated by the pandemic, online long-form viewing was a key growth area and recorded the fasted growth rates in all countries surveyed. 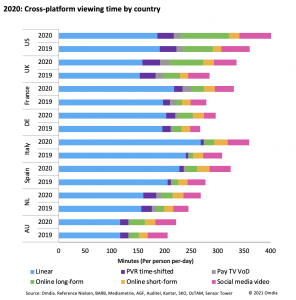 The share of viewing time devoted to online platforms has increased, with an average of 21 minutes per-person per-day devoted to short-form content, and 59 minutes to longform content. In Europe however, online long-form reduces to an average total of 32 minutes, while online short form rises to 22 minutes

Non-linear viewing increased its share of total viewing, excluding social media), from 31% to 37% in the year, with online long-form accounting for just over half of nonlinear viewing.

Average social media viewing time increased by eight minutes to 50 minutes across the markets surveyed. Facebook was the leading platform for social media video viewing, despite competition from TikTok. However, TikTok recording the fastest growth rate for a social media platform

The US stands out as the cross-platform viewing leader, with cross-platform TV viewing time rising by 11.2% in 2020 to 341 minutes. Linear viewing in this market continued to decline despite the pandemic, albeit at a slower rate, while time-shifted viewing also fell due to pay TV churn. Linear viewing accounted for only 55% of total viewing time at the end of the period studied.

In the UK, the second most advanced market in this respect, linear TV viewing grew for the first time in a decade due to the pandemic, but non-linear viewing rose by 47.8% in 2020 to 135 minutes per-person per-day. A majority of this growth was in online long-form viewing.

Non-linear viewing saw an almost identical percentage increase in France from a lower base.

Omdia surveyed viewing habits in the US, Australia and six European markets – the UK, France, Germany, Italy, Spain and the Netherlands.

“Despite linear TV’s return to growth across Europe in 2020, the rapid uptake in online long-form viewing demonstrates how quickly the viewing habits in the region are changing. The US is a prime indicator of this shift with only 55% of total tv viewing time now coming from linear TV, down from 62% in 2019 – the largest YOY decline in the US to date,” said Rob Moyser, senior analyst at Omdia and author of the report.