Global Spanish-language phenomenon La Casa De Papel (Money Heist) led the top 10 in-demand originals in France in the week from September 12-18, according to the latest data from Parrot Analytics. 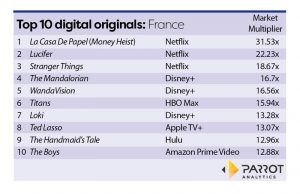 La Casa De Papel, which was recently identified by Parrot as the most in-demand series globally, topped the list, being 31.5 times more in demand than the market average for titles, according to Parrot’s calculation.

That put it far ahead of second-placed Lucifer, like La Casa De Papel from Netflix, with the streaming giant’s Stranger Things giving it the top three in Parrot’s French list for the week.

The rest of the top 10 was led by Disney+ with three titles including fourth-placed The Mandalorian and fifth-placed WandaVision.

The remainder of the list comprised Disney+’s Loki, Apple TV+’s Ted Lasso, Hulu’s The Handmaid’s Tale, which is available on OCS in France, and Amazon Prime’s The Boys.